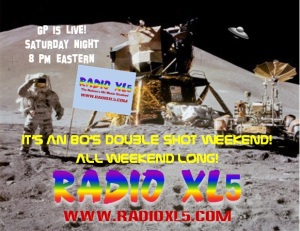 Here is a perfect example in 3 minutes or so of how live radio talent makes all the difference in the world.

There are about 52,ooo free Internet radio stations on the air at any given time  and a quick check at the time of this posting there were over 600,000 people listening using their Shoutcast application.  This does not include fine services such as Pandora and Spotitfy. Many of these stations are automated where there is no human on the other end; just a computer. Ditto for many terrestrial radio stations. These are fine entertainment alternatives because at times all you want to do is disconnect from the negative vibes in the world. These options are great for doing that. Getting off the news grid is good but a steady diet of automation all the time can leave you just wanting a live human voice; just somebody living and breathing at the same moment as you listen. So many alternatives on the  Internet means these services are mostly automated when it comes to music and entertainment. Automated systems can make you feel disconnected, at times, from other humans. Now don’t get us wrong , automated systems, driven by computers, provide a mighty fine product. In our personal lives here at Radio XL5, we  love these services/prodcust. But studies show we feel more connected when there is a human on the other end. At Radio XL5, we try to provide that as often as possible. When we say we are live we mean it! We are live! We make the radio in real time. Fresh from the tap so to speak.

This brings us to our live broadcasts on Saturday nights from 8 to 11 PM (eastern) from our Radio XL5 World Broadcast Headquarters. This is when GP straps into the air chair, show prep in hand and more to say than time usually allows. The idea is connect to America from our Boston studios. We are ‘The Nation’s Hit Music Station – From Boston for the USA!” This is a big responsibility in that while we are from Boston we want the entire USA and our service men and  women to know we are one Nation. To that end GP believes radio has not changed much from the early days of radio, before television. Radio is theater of the mind. What you say and, how you say it, creates an image in the mind of the listener and that image is designed to be positive, encouraging and funny. We all have a desire to be entertained and informed. Life can be a grind but listening to “radio” should not be a grind. So at Radio XL5 you will not hear 10 minutes of commercials before you hear a “ten in a row” only to be assaulted by another ten minutes of commercials! And if you have not noticed the so called ‘air talent” on terrestrial radio are usually limited in what they can say. They often have to read “liners” and say their name once in a while.

So why are we posting this? Well this sound clip is a compilation based on a seed of an idea that GP had just as he went on the air 8 March on Radio XL5. Simply, one of his FB friends posted a status update suggesting that the next time the waitress asks what your beverage request is one should say “I’ll have a diet water” and watch for their reaction. A simple idea but GP thought it would be fun to work it into the 3 hour broadcast, sort of as a running joke. He never stated what prompted it except to acknowledge ‘Steve” who posted that status update.

So sit back and listen to “radio”, specifically Internet radio, the NEW radio; the radio that will be sent to your car’s dashboard using the 3G/4G wireless infrastructure of the Verizon’s, Sprint’s, ATT’s and T-Mobile’s of the world. Radio as in Radio XL5 is alive and creative and is the future!